The biggest Christmas marketing campaign in Visit Harrogate history, Destination Christmas, came to town from November to January, bringing not only festive cheer but visitors aplenty to enjoy the variety of activities on offer across the District. Through support from partners, the campaign saw everything from a magical Destination snow globe positioned in London Kings Cross station, as well as across the district, a creative identity created for the campaign and increased engagement on social media through the use of digital influencers – all showcasing Harrogate District as the perfect Christmas destination.

A partnership with LNER saw the eye-catching and enchanting snow globe travel to the capital to take a prime position in one of London’s busiest train stations, Kings Cross. The station which sees hundreds of thousands of commuters each day, allowed for maximum exposure of Destination Christmas whilst promoting the direct LNER line from London to Harrogate.

Located in the centre of the concourse, visible from all the main approaches, the giant Destination Harrogate snow globe attracted the attention of travellers across a full weekend in November 2021. Swiftly becoming THE meeting point at the station, visitors pulled out their mobiles to text “meet me by the snow globe” before getting the ultimate instagramable shot.  The snow globe not only made a visual impact, it also offered an interactive experience for children, families and indeed anyone willing, to climb inside and play in the soft, warm artificial snow, many covering themselves from head to foot – creating irresistibly festive photos. The use of the hashtag #snowglobselfie was encouraged to give people a chance to win a luxury weekend at the Harrogate Christmas Fayre with a first class rail experience with LNER.

Back in Yorkshire the globe fun continued as the snow globe toured Leeds and the Harrogate District for a further two weekends.  Key partners had their own specially designed digital versions of the globe featured on social media and there was even a musical animated version that filled Instagram feeds throughout the festive season!

Social media activity played a key role in amplifying the campaign and creating a buzz online around the Christmas events.

During November and December, the Destination Christmas campaign had a total reach of over 1.4 million on Facebook and over 300K on Instagram. National and local bloggers were engaged to further showcase the Christmas activities with visits from Heather On Her Travels, Rachel Nicole and The Harrogate Girl. This resulted in an increase of 1366 Facebook followers and 883 Instagram followers on the Visit Harrogate channels.

Harrogate District has long been a favourite Christmas destination. The Christmas Adventure at Stockeld Park led the way back in 2006 with the first illuminated Enchanted Forest in England.  The illuminated ruins at Fountains Abbey have also long been a staple of the district’s seasonal attractions.

New for 2021 was the Christmas Fayre – wooden chalets lined the pedestrian streets of central Harrogate with around 50 traders from Yorkshire and beyond offering a range of festive goodies. The Carousel, Ferris Wheel and Helter Skelter sang out to attract passers-by offering a fun family experience. Whilst the Candy Cane Express road train transported visitors across the town, making sure that they could take in all the sights and sounds of the Christmas events.

We would like to thank all of our partners that helped us to make Destination Christmas truly special; Stockeld Park, Fountains Abbey and Studley Royal, Turkish Baths Harrogate, Swinton Estate and Rudding Park.

We’ll be planning the Christmas 2022 campaign soon, so be sure to let us know if you want to get on board. 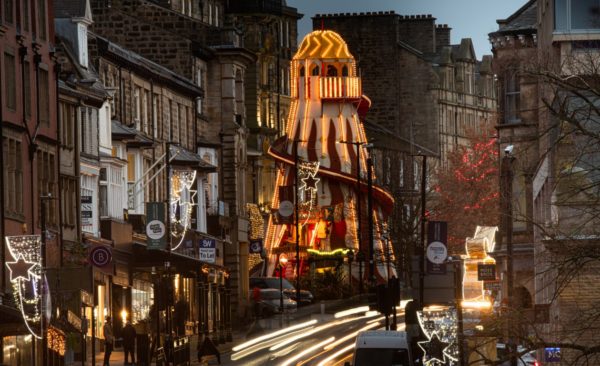 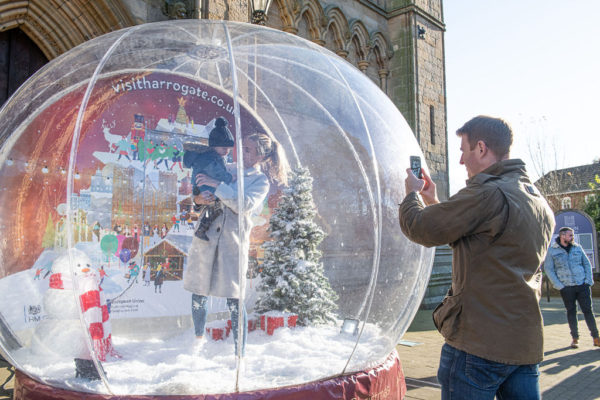